Excitingly, we’ve made it to week two in a weekly series of roundups from the world of rugby.  I appreciate that might not sound incredibly momentous, but given that its further than I ever managed with pre- season training, I’m taking it as a massive win! We managed to get through the gap weekend of the six nations without too many tears, but based on this list, we haven’t entirely forgotten about it.

1. Boy sings English National anthem like he means it 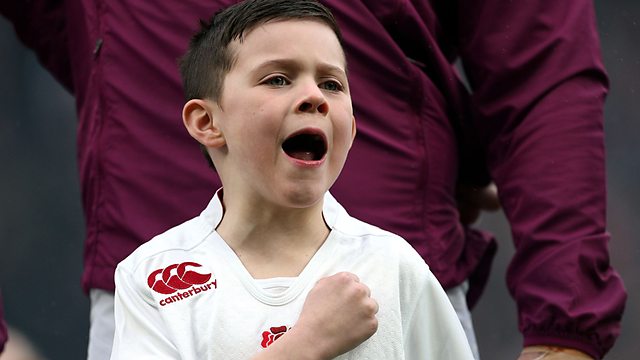 This heartwarming story of Plymouth’s 6 year old Harry Westlake is still the most shared rugby story online. Not exactly one for the purists, but even the most cold hearted of rugby cynics couldn’t fail to be moved to at least a smile at the young lads conviction. Put the rest of the England side to shame.

2. America are going to rule the world at 7’s

I’m surprised that it only took two weeks for an American site to make it into this roundup, I’m not in any way at the content of this story. Please do click the link to see it in its full glory, if pushed for time, here are the edited highlights(?)

1. Its not as hard to understand as 15 man rugby

2. We’ll be better than everyone else

5. Carlin Isles is better than everyone else

*Yes commercial breaks. Apparently the shorter halves give rise to more breaks which means the audience has less chance to get bored….

7. Your favorite college probably has a team that’s better than everyone else.

Now, I’m not saying that any of this isn’t true and undoubtedly team USA getting more involved in rugby can only benefit the game. I do like rugby though and the longer it can go without Shaun Edwards being described as the mastermind of deeeefence, the better.

Though thanks to the actions of Karmichael Hunt, there might be a few more rugby/jail conversations this week,  this story comes in from my new favourite site, The Betoota Advocate. What a name!

The story recounts how one of Queensland’s most notorious jails has applied for a rugby league franchise looking to call themselves ‘The Wacol Crocs’ (Australians should name everything) and looks to be close to going ahead. The team have a coach in place, have been training regularly and according to the prisons  General Manager Troy Penscrew “most of our inmates are ex-Leagueys that work out all the time”

4. Richard Hibbard can actually direct a ball exactly where he wants it

Much maligned in certain quarters for being found wanting when it comes to ball control, Welsh hooker Richard Hibbard has proved his accuracy is not a problem.

Its all a bit murky and hard to comprehend at present, but here goes, Karmichael Hunt, the Queensland Reds new marquee signing (think Sam Burgess at Bath) is currently being investigated along with a group of former rugby league teammates under the suspicion of trafficking cocaine. Or as the investigating team put it “identified allegedly arranging the supply of cocaine during an ongoing drug trafficking investigation”

So here we endeth for another week, what did I miss? Let me know in the comments and I’ll get on it. Did you miss last weeks? Shame on you. Done this quiz yet? No? Get on it, there’s a proper prize and everything. Never want to miss a thing? Don’t blame you, sign up in the sidebar.

This site uses Akismet to reduce spam. Learn how your comment data is processed.