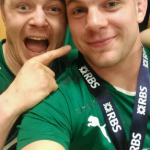 In August, The Observer newspaper published an article outlining their top five hot rugby prospects or ‘ones to watch. With the new season about to be a month old lets have a look at how these are getting on. 1. Tom Stephenson (Northampton) Unfortunately for Tom, the big England U20’s centre has yet to make
Read More
The biggest news being Earls returns to the starting line up with McFadden dropping to the bench. Hopefully this should lead to a bit more defensive cohesion in midfield, then again, its not like Keith Earls is world renowned for his defence. Could be a very long afternoon in Paris 15 – Rob Kearney (UCD/Leinster)
Read More
The French have named their side to face Ireland on the weekend. There are four changes in the forwards yet the backline, ominously, remains unchanged. Most notable of the changes being Harinordoquy who comes onto the flank to form what looks like a serious back row combination. This and the backline that really started to
Read More
As if reliving centuries old rivalries wasn’t fun enough, you can of course make the victories that little bit sweeter and defeat a little easier to bear, with taking a few quid off the bookies Paddy Power are offering a fairly ‘generous’ 2/1 on the three favourites France, England and Scotland to get the result.
Read More
Declan Kidney has announced his side to face Wales on Sunday with few surprises. Keith Earls attempts the impossible, replacing O’Driscoll at 13 and Andrew Trimble makes it onto the left wing. Conor Murray faces a horrible 6 Nations debut up against his doppelganger Mike Phillips. Peter O’Mahony is likely to get a debut from
Read More
Well if last weekend was a big weekend for both Wales and Ireland this weekend dwarves it in comparison. These two sides have produced some incredibly close Six Nation encounters and I can’t imagine there are too many of us who are expecting anything different. Ireland may have got all of the coverage for their
Read More

This weekend, just in case anyone didn’t notice,  another Ireland victory powered them through to the Quarter Finals of the Rugby World Cup. Without wanting to get too ahead of ourselves its a special time for Irish rugby and a special group of players to boot. Which is all just great. I started to
Read More
Declan Kidney has announced his team to face Italy on Sunday. ROG starts at 10, which against the Italians, seems to be the right decision. Full Team as follows: 15 – Rob Kearney (UCD/Leinster) 14 – Tommy Bowe (Ospreys) 13 – Brian O’Driscoll (UCD/Leinster) (capt) 12 – Gordon D’Arcy (Lansdowne/Leinster) 11 – Keith Earls (Young
Read More
Declan Kidney has announced his side to take on the mighty Australians in Saturdays rugby World Cup group D decider. Although the Irish put on a fairly lacklustre display against the USA last week they are bolstered by the return of four first team regulars from injury. Team as follows: Rob Kearney, Tommy Bowe, Brian
Read More
Declan Kidney has announced the side to face the USA on Sunday.  Good to see Bowe and Earls on the wings, Conor Murray needs the experience and he has confirmed my worse fears by starting Geordan Murphy. I smell a Georgia… Ireland: G Murphy; T Bowe, B O’Driscoll, G D’Arcy, K Earls, J Sexton, C
Read More
So here we have it. The tier system threw up a bit of a surprise with the Cardiff Blues in Tier 1, for reasons why head to @HarpinOnRugby he’s a man with all the answers. So here’s what we have to look forward too: Pool 1: Munster, Northampton, Scarlets, Castres Pool 2: Cardiff, London Irish,
Read More